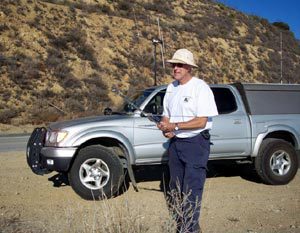 A little about the founder, Bob Miller.

He joined Civil Air Patrol (CAP) in July, 1967. In those days airplanes didn’t have Emergency Locator Transmitters (ELTs) so the average search for a missing aircraft lasted three to four weeks. Less than 30 percent of these searches ever culminated in a find.

In 1972, someone decided that if we put an ELT in all the airplanes that would transmit a distress signal when they crashed, we would be able to track them down more quickly. Electronic search was born. The ELTs improved the search process tremendously, bringing the average search time down to five to seven days. The overall find rate doubled to over 62 percent.

This still wasn’t very good, and it created an entirely new set of challenges, from the need for better ELTs able to withstand the force of impact in a crash and transmit for longer periods of time, to the need for better Radio Direction Finding (RDF) gear and search techniques.

Again, some smart person decided that if we put a series of satellites in a polar orbit with the ability to detect the Doppler shift of the emergency radio signal as they passed over, we could then triangulate the position of the crash within a few hours.

And, it worked great! This new system meant that if you crashed your airplane, Search and Rescue forces would be on their way to you within a few hours. Search times were reduced to eight to ten hours or less and the find rate to 96 percent.

Today we are looking at an even better system being put into operation. It is a satellite-based system using global positioning technology which the ELT has built into it. Upon activation, it will transmit its ID number and its position within 60 meters to a satellite in geosynchronous orbit on 406 MHz, while continuing to transmit the homing signal on 121.5 MHz and 243 MHz.

With more than 40 years of experience in Search and Rescue, Bob has the expertise and knowledge to develop the right tool for your RDF needs.